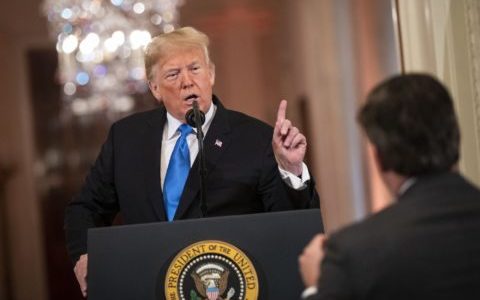 White House Press Secretary Sarah Huckabee Sanders accused Acosta of being disrespectful to a White House intern during the press conference. The intern had been passing the microphone among reporters to ask questions. At one point, she tried to take it from him and he wouldn’t let go.In a statement, which did not mention Acosta by name, Sanders started off by saying that the president “welcomes tough questions of him and his administration.””We will, however, never tolerate a reporter placing his hands on a young woman just trying to do her job as a White House intern,” she said. “This conduct is absolutely unacceptable. It is also completely disrespectful to the reporter’s colleagues not to allow them an opportunity to ask a question.”As a result of today’s incident, the White House is suspending the hard pass of the reporter involved until further notice,” Sanders added in the statement.Acosta said on Twitter that the Secret Service had barred him from entering the White House on Wednesday night, and called Sanders’ statement “a lie.”As the press conference wore on, Trump grew angry as he was asked about the Republican Party’s loss of the House of Representatives the night before and his fiery language during the midterm campaign.The president had called on Acosta — a frequent foil — to ask a question that Trump surely knew would provoke him. Acosta didn’t disappoint, implicitly criticizing the president for his immigration rhetoric. Trump called Acosta “rude,” repeatedly told him to “sit down” and stop asking questions, and stepped away from his lectern to briefly pace the stage in anger.Trump told PBS News reporter Yamiche Alcindor, who is black, that a question about his embrace of the term “nationalist” was itself racist. He complained frequently that coverage of his administration was unfair.“I do have the right to fight back because I’m treated very unfairly so I do fight back,” he said. “And I’m fighting back not for me, I’m fighting back for the people of this country.”CNN said in a statement that the revocation of Acosta’s credentials was “done in retaliation for his challenging questions at today’s press conference.” The network added that Sanders “provided fraudulent accusations and cited an incident that never happened.”Trump later brought the intern to the Oval Office for a photograph.Read More: Sessions Is Forced Out After Months of Trump Abuse Over MuellerTrump knew when he began the session that his remarks would wind up being only the second-biggest story of the day.Earlier in the morning, his chief of staff had called Attorney General Jeff Sessions to tell him: the president wants your resignation. But Trump repeatedly deflected reporters who pressed him on his embattled chief law enforcement officer, refusing to say what changes he planned to make in his administration.Trump had a message to deliver, and he didn’t want any distraction: the loss of the House was someone else’s fault. Those lawmakers who had embraced him, Trump insisted, had been victorious.He opened his remarks by rattling off the races where his campaigning had paid dividends, especially in the Senate, where Republicans look set to expand their majority.“I’m really happy with not only the way it came out but the response to me as president,” Trump said.And then, in yet another move with no known precedent, he called out by name Republicans in swing districts who had tried to run without him — and lost. “Too bad,” he said of two of them, Colorado’s Mike Coffman and Utah’s Mia Love. “I’m not sure if I should be happy or sad. But I feel just fine about it.”Whether he was acting or not, Trump presented himself as emboldened by the election results, not chastened. And his assessment reinforced a central principle of his presidency, one that Sessions never fully accepted: this president prizes fealty above all.

While few emerge unscathed from Trump’s orbit, the fall from grace for his attorney general was remarkable. The first senator to back Trump’s campaign, Sessions was an early influence in Trump’s inner circle and dutifully implemented Trump’s hardline immigration policies at the Justice Department.But Trump never forgave Sessions’s decision to recuse himself from Special Counsel Robert Mueller’s Russia investigation, proclaiming loudly and frequently that it was a betrayal. Sessions’s chief of staff Matthew Whitaker, named as acting attorney general, will take over Mueller’s investigation after publicly suggesting that it was misguided and should be ended.Read more: Sessions Is Forced Out After Months of Trump Abuse Over MuellerAs Trump made clear in his 86-minute news conference on Wednesday, he has little patience for those who don’t believe in his political talents, or who would deign to interfere with his ambitions.For Democrats, he had both an offer and a threat. He said he’d be happy to work with them on bipartisan issues such as infrastructure development and health care. But if the opposition party dared to use their newfound power to investigate his administration — as Democratic leaders have promised and their supporters demand — he’d abandon any pretense of cooperation and blame them for Washington’s gridlock.Moreover, he warned, he’d summon Senate Republicans to investigate the Democrats themselves.“It’ll go back and forth and it’ll probably be very good for me politically,” Trump said.

The president’s visceral desire for devotion underscores the extent to which Trump still views his presidency through the lens of a campaign, with all interactions classified as support or opposition.That framework only calcified in the closing weeks of the midterm elections, as Trump freed himself from the dreary and often frustrating work of governance and traveled the country holding raucous political rallies loaded with red meat for his base supporters.That Trump has his eye on 2020 is obvious: he closed the news conference with a recitation of all he’s done for America in two years, wrapped around a pledge to keep the country secure both overseas and at its borders — essentially the opening salvo of his re-election campaign. In the middle of the freewheeling news conference, he even asked Vice President Mike Pence to join him on his re-election ticket. Pence accepted.But Trump’s insistence that the rest of Washington embrace him could also leave him vulnerable if he seeks policy accomplishments in the next two years. He conceded on Wednesday that his proposed 10 percent tax cut for the middle class, invented from whole cloth mere weeks before the election, was unlikely to materialize under Democrats unless he agreed to raise other taxes.Earlier in the day, Senate Majority Leader Mitch McConnell said that repealing Obamacare was probably off the table with Democrats controlling the House.

And Trump’s insistence that the country bend to his will seems to have already backfired with the moderate voters he’ll need in 2020. Democrats captured governor’s mansions and retained Senate seats in Michigan, Pennsylvania, and Wisconsin, the Rust Belt states that put him in the White House in 2016. If Trump can’t find a way to reverse Republican losses among the college-educated and female voters in those states, he faces a much tougher path to re-election.Still, Democrats’ inability to parlay their success in suburbs and among women voters into victories in key Senate and gubernatorial races in Florida, Georgia, Ohio and Missouri denied them a clear repudiation of the president, and only expanded Trump’s confidence in his own political abilities. Asked if he planned to change anything after reviewing Tuesday night’s results, Trump offered little introspection.“Well, I think the results that I’ve learned — I think people like me,” Trump said. “Like the job I’m doing, frankly.” DM